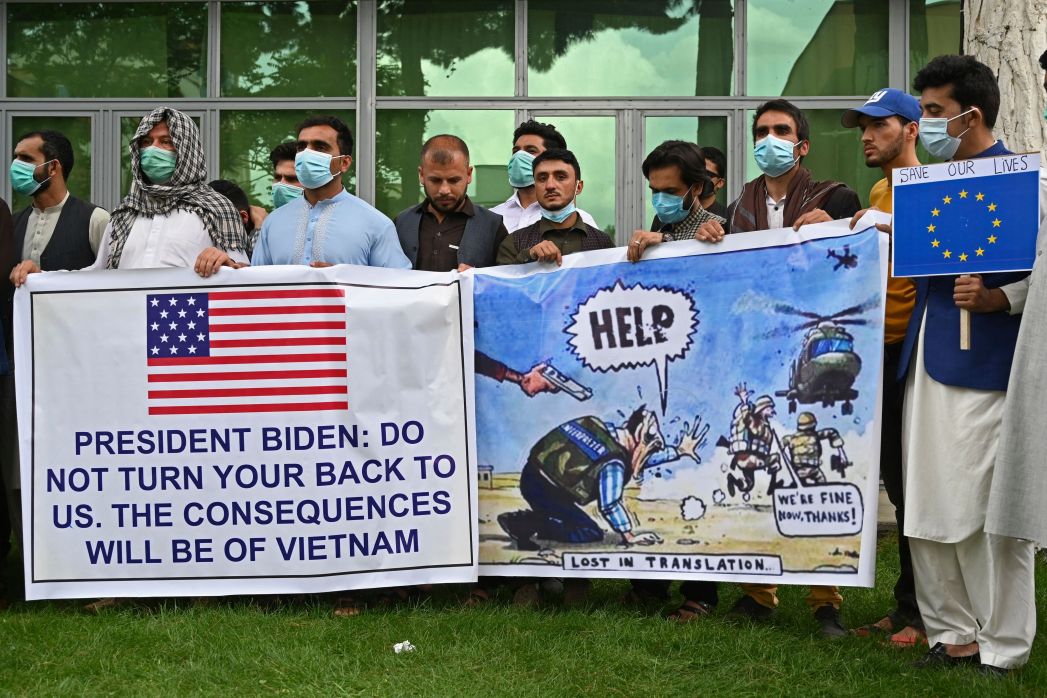 Afghan former interpreters for the US and NATO forces gather during a demonstration in downtown Kabul on April 30, 2021, on the eve of the beginning of Washington's formal troop withdrawal -- although forces have been drawn down for months. (Photo by Wakil KOHSAR / AFP) (Photo by WAKIL KOHSAR/AFP via Getty Images)

Chairman Meeks and Ranking Member McCaul wrote a letter to the Secretary of State calling for urgent and bold action to be taken to ensure that the brave men and women of Afghanistan that served alongside our Troops as interpreters are not left behind. We applaud the Congressmen for joining us in calling for action to ensure the United States keeps its promise to bring these interpreters to safety.

We’ve been calling for action on this issue for months and we are grateful that members of Congress are taking this issue seriously and see the need for immediate action. While we’re happy to see this issue being elevated and awareness being raised, awareness alone will not protect the SIV holders/applicants if they are left in harm’s way. Immediate action is needed.

From Chairman Meeks and Ranking Member McCaul’s Letter to the Secretary: “These individuals have put their lives on the line to facilitate the security operations of the United States and our partners. Oftentimes, their willingness to accept difficult and dangerous work was informed by the prospect of qualifying for a Special Immigrant Visa (SIV) that would allow for lawful permanent residence in the United States. We made a promise to those Afghans who supported our efforts and it is imperative that we keep our word to them. No one who qualifies for a SIV should be left behind—and potentially at risk—after U.S. forces exit.

The Special Forces Association’s National Director for External Communications Doug Livermore: “The Special Forces Association (SFA) is very proud of its work with the Special Operations Association of America (SOAA) and No One Left Behind, the organization that has been at the very tip of the spear driving efforts to reform the Special Immigrant Visa Program. Moreover, the National Board of the SFA wishes to express its deepest appreciation to Chairman Meeks, Ranking Member McCaul, and the entire House Foreign Affairs Committee for their critical and timely leadership in advocating for these much-needed reforms while also ensuring that America honors its commitments to our Afghan interpreters and their families.”

Special Operations Association of America’s Executive Director Daniel Elkins: “Special Operations Association of America (SOAA) is extremely grateful to see this life or death issue being taken up by Chairman Meeks and Ranking Member McCaul. We hope the rest of Congress and the Administration will follow their lead and take the bold steps necessary to bring these true heroes to safety. SOAA also thanks the Special Forces Association and especially No One Left Behind for their tireless efforts on this vital issue.”

Get Involved and Join Us!

History of the Navy SEALs

The Veteran Who Healed His Traumatic Brain Injury

Support for The Camp Lejeune Justice Act of 2021