While the birth of Ranger Regiment is often associated with Rogers’ Rangers and his famous rules of engagement, the first Ranger and the inspiration of those rules was born over a century prior. As one would expect, Benjamin Church, born in Plymouth Colony in 1639, was unorthodox compared to his peers. Choosing to befriend and learn from neighboring Native Americans on how to live on the frontier, hunt and fight, Church set the standard for all American special operations to come: 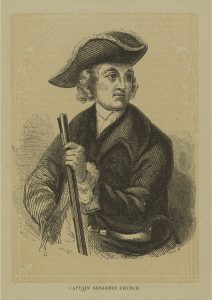 While Church’s contemporaries scorned him at first for his unconventional methods that adopted aspects of Native American warfare, Church’s string of successes during King Philip’s War more than defended the worth of Church and his Rangers. At the beginning of King Philip’s war, the British and Colonists were unable to adapt and remained at a disadvantage to the unconventional warfare of the Native Americans. Wanting to line up in large and localized formations as if they were on a traditional open plane, the Colonists were devastated by small, targeted guerrilla tactics. Committed to slow firing flint muskets, the Colonists could not engage at a tempo to react to the mobile and efficient bows and clubs of their enemy.

Church, however, blended the tactics and weapons he picked up while studying the Wampanoag language with traditional English warfare, and the first Ranger regiment was born. Church welcomed Colonists and Native Americans alike, and rigorously trained them as a special unit within the war effort. He did not only train his Rangers in tactics or warfare; what set Church and his Rangers apart was their shared philosophy of engagement. Church and his men all expressed shared principles on combat to each other, forming a solidarity within their regiment that would come to mark and set apart future operators:

Church and his Rangers acted covertly and independently of the Governor. While the Colonists focused on maintaining defensive positions, Church and his men successfully executed raids and tactical strikes throughout the remainder of the conflict, strategically weakening enemy strongholds and supply lines, and rallying neutral or previously hostile forces to the Colonists’ aid. After operating for one year, Church’s Rangers conducted an operation against Metacomet, known as “King Philip,” who died during the skirmish, effectively ending the war.

Over the next three decades, Church and his Rangers continued to operate in two more wars, solidifying the need for specialized units to respond to unconventional and unforeseen conflict. Benjamin Church died peacefully in Little Compton in 1718 after recently publishing his work on military tactics, Entertaining Passages Relating to King Philip’s War. The principles found in this work are still formative in Special Operations culture, and went on to inspire Roberts’ Rangers.

The Untold Story of Women in Special Operations