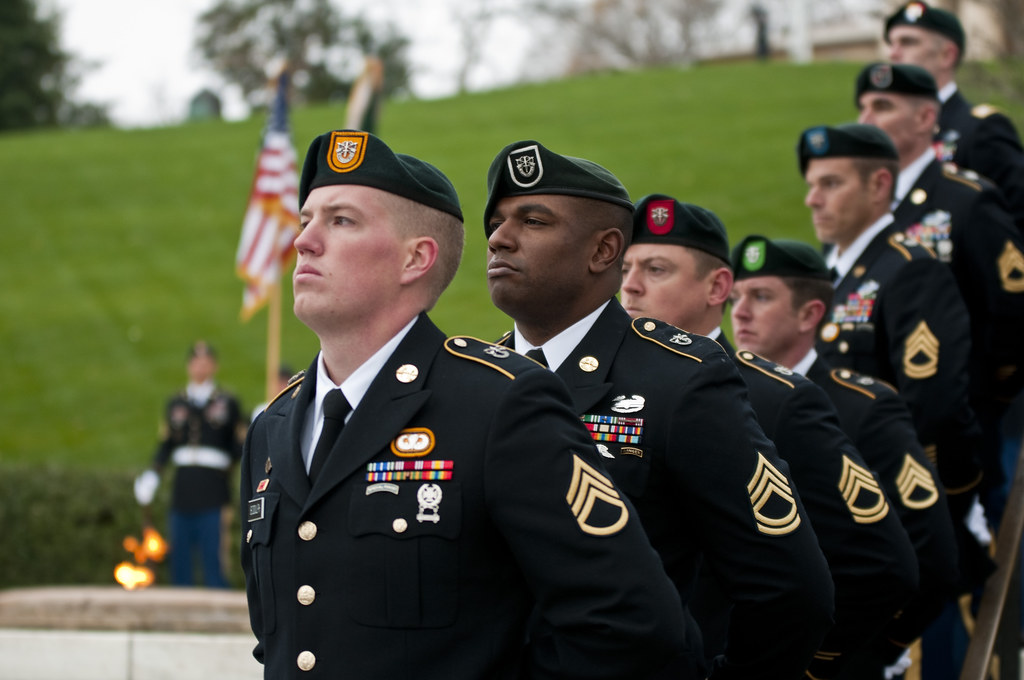 Allow us to be biased for a moment: our founder is currently serving in the Special Forces, so here at the Special Operations Association of America we are quite fond of Colonel Aaron Bank. Known as the father of the Green Beret’s, Bank was one of the strongest advocates of unconventional warfare operations to combat fascist and communist expansion. Born November 23rd, 1902 in New York City, Bank was educated in French and German, and before volunteering for the Army in 1939, he enjoyed extensive travel throughout Europe. In 1943 Bank became aware of needed volunteers for special assignments, and immediately signed up. Little did he know that this was the beginnings of the famous Office of Strategic Services (OSS) and the birth of modern Special Forces.

Bank had just what the OSS was looking for: a polyglot, well-traveled, mature and fit, adventurous and adaptive. He served as an officer in the OSS and was assigned to a small unconventional warfare unit known as a Jedburgh team. In his service under the OSS, Bank conducted both espionage and special operations, pioneering strategies of sabotage and leading a guerrilla force.

In late 1944 and early 1945, Bank was asked to command “Operation Iron Cross”, which evolved into a plan to capture or kill Adolf Hitler. The original plan was for a company of men disguised as German soldiers to jump in near Innsbruck in present-day Austria. There, they would conduct subversive operations and induce German soldiers to desert. However, when General William Donovan, head of the OSS, was briefed on the progress of Iron Cross he changed the mission. Hitler had been threatening to withdraw into the National Redoubt–the mountainous area on today’s German-Austrian border. This was exactly the target of Iron Cross, and Donovan ordered a new mission: “Tell Bank to get Hitler.” The men of Iron Cross began training in raid and snatch techniques–their goal was to capture Hitler alive and deliver him to a war crimes tribunal. As we know, “Operation Iron Cross” never occurred, as Hitler preemptively offed himself like a coward, but Bank continued to develop unconventional operational techniques in Indochina after the war.

It was Aaron Bank’s next assignment as the Chief of the Special Operations Branch under the Office of the Chief of Psychological Warfare that had a profound impact on Special Operations Forces’ history. After the intelligence branch of the OSS evolved into the CIA, there was a debate whether the special operations branch of OSS should persist and become its own branch. MG Robert A. McClure, Bank’s commanding officer, encouraged Bank to staff and push the Army for the approval of an OSS Operational Group-style unit. Colonel Bank was instrumental in convincing the Army it needed such a force, crediting the threat of the Soviet’s Iron Curtain, and in 1952 Colonel Bank became the first commander of the Army’s first Special Forces unit.

We didn’t just take the Airborne, but the cream of the Airborne–the hard-bitten troopers who were willing to take calculated risks and face challenges that conventional units need never be concerned with.

Keeping with his OSS roots, this unit was called the 10th Special Forces Group, hoping to encourage suspicions among the Russians that there were nine more. In establishing the 10th, Colonel Bank was as flexible as he had been with Iron Cross, drawing upon former members of the Devil’s Brigade, as well as veterans of the OSS, Parachute Infantry units and from guerilla fighters of the Pacific. “We had no precedent, no manuals,” Bank confessed. “Herb Brucker and I developed our own program–the Army left us alone. We didn’t just take the Airborne, but the cream of the Airborne–the hard-bitten troopers who were willing to take calculated risks and face challenges that conventional units need never be concerned with.”

To become a member of the Special Forces and earn the Green Beret, Servicemembers must still volunteer to undergo a difficult and grueling assessment process–known as selection–just like Aaron Bank was required to undergo when he volunteered for the OSS.

President Biden, Save Our ANASOC Ally!