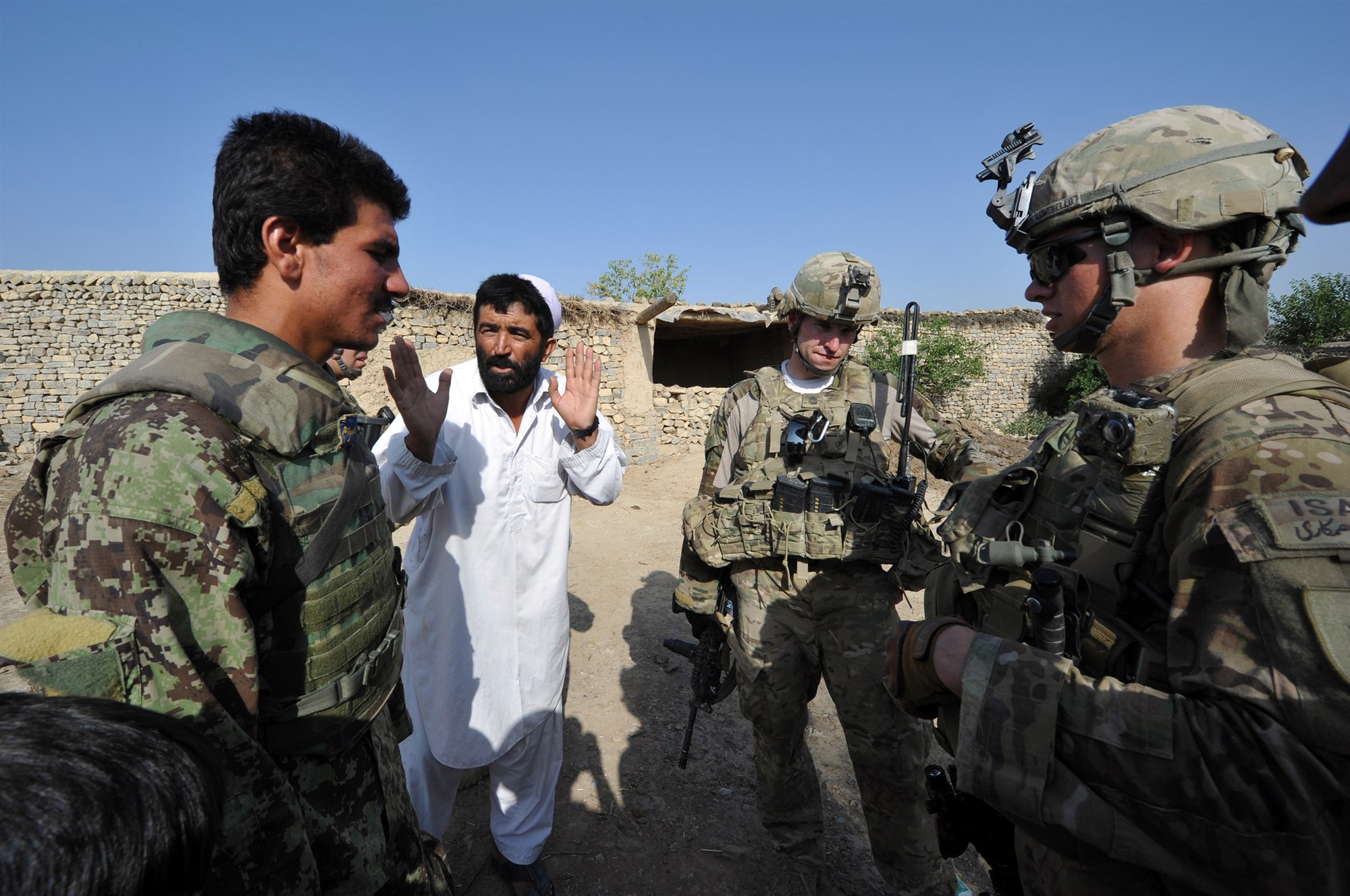 An Afghan soldier, from left, serves an interpreter as a civilian talks to US soldiers from Viper Company (Bravo), 1-26 Infantry during a patrol at a village near Combat Outpost (COP) Sabari in Khost province in eastern Afghanistan on June 19, 2011. Ted Aljibe / AFP - Getty Images file

On February 4th, President Joseph R. Biden, Jr. signed Executive Order 14013 directing the Departments of Defense, State, and Homeland Security to conduct a 180-day review of the Iraqi and Afghan Special Immigrant Visa (SIV) programs. The review comes after over a decade of troubling delays in SIV program that have led to a backlog of 18,000 applicants in Afghanistan alone. Since 2018, No One Left Behind has identified over 300 incidents in which they have been targeted and killed by the Taliban as they awaited adjudication of their visa applications. Yet as much as this population needs a revamped SIV program, Congress should also consider a mechanism for defense intelligence assets (human informants) to apply for visas.

Iraqi and Afghan interpreters and translators are some of our government’s most loyal and resourceful teammates on the ground. Many have been targeted for assassination, died while serving on missions, and/or have left families in despair – all due to their honorable and often heroic employment with America’s most valued warriors. The SIV program was created to provide an avenue by which they could be resettled safely in the United States.

Human intelligence assets have performed courageously as well, but they have no SIV-like program to offer escape from death. Like American intelligence officers, they have taken on extremely dangerous operations, facing near certain death if caught by terrorist and insurgent groups. Yet despite their status as a special class of prospective refugees, earned by their bravery, risk-taking, loyalty and sacrifices, intelligence assets have few options of escape once their operations have terminated.

Under 50 U.S.C. 403(h), the Central Intelligence Agency (CIA), with the permission of the departments of Justice and Homeland Security, can relocate foreign agents to America regardless of ties to terrorist organizations that would derail a SIV application. That resettlement program, with its authority at the Director of Central Intelligence, is insufficient relative to the growth of the defense human intelligence and counterintelligence enterprise since 1949. In 1949, the government’s clandestine human intelligence and espionage activities were largely consolidated at the CIA, but since September 11, 2001, the Defense Department has significantly expanded its sensitive human intelligence programs. The United States Special Operations Command has defeated thousands of terrorists due in large part to intelligence agents abroad.

The current alternative mechanisms for their resettlement—SIVs, P-2 visas and other refugee resettlement programs – are not enough. For example, only 26,500 SIVs have been allocated for Afghanistan since 2014. And with its charter to support interpreters and translators as well as the challenge of evaluating the discreet service of intelligence assets, the existing SIV program is insufficient for this population anyway. Human intelligence assets cannot provide evidence of their discreet relationship with the U.S. government. Additionally, their inevitable contacts with terrorists, insurgents and criminals would most likely disqualify them from any visa – even though those ties were directed by the U.S. government and despite the strict vetting they undergo.

But a similar version of the SIV program could be authorized by Congress and implemented by OUSDI to resettle Iraqi and Afghan intelligence assets in the United States at far lower cost. That would require stronger coordination among agencies, and the SIV application process would have to change to facilitate the safe entry of foreign nationals involved in intelligence work. However, such assets undergo extensive vetting and their visa applications should be more simply adjudicated if the sensitive nature of their service could be properly documented and communicated to authorities. Such a program would also be a better fit for the larger population of tactical and operational-level human intelligence assets managed in conflict zones.

As the United States winds down its operations in Iraq and Afghanistan – while continuing to engage there and in hundreds of other places – the time to act is now. America’s safety and security – provided in part through defense intelligence and special operations – and most importantly, lives, depend on it.